Argos are selling this, the iLuv 1BA200. Its a bit more expensive than some others, but its the width of your average top tube, very light and keeps the iPhone running – so far about 6 hours for a 3G. 3GS would last longer, and 4 probably all day!

Looks a bit Heath Robinson I know, but it works and is simple in use. I used this on the Princes Risborough sportive. While the power was fine, the Phone lost GPS for about a third of the route. Big old fail. Oh well.

GPS does work up the Cotswolds and I have managed one great ride planned on Everytrail and followed in Cyclemeter. Slow though as I was recovering from the ITB:

Off on a sportive tomorrow, so tested Cyclemeter today. For the ride I won’t be using the stem mount – that’s only for when I’m in uncharted territory. However I wanted to test the map anyway. As others have said I don’t think the iphone battery is going to last the ride, but we’ll see. 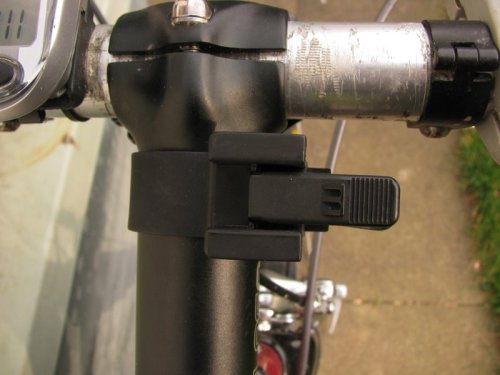 Here’s the clip on the mount: 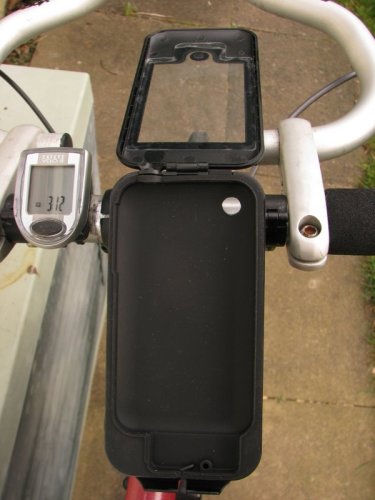 iPhone nestling in the cover: 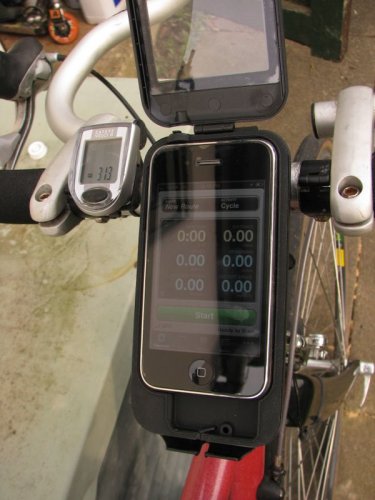 The clip – I dont’ trust this clip and have heard of phones flying out of several different makes of mounts: 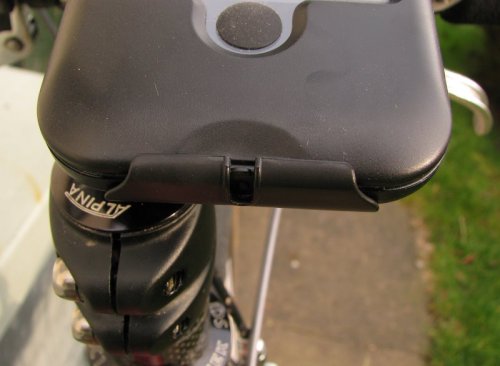 Everything in place and laggy bands for insurance: 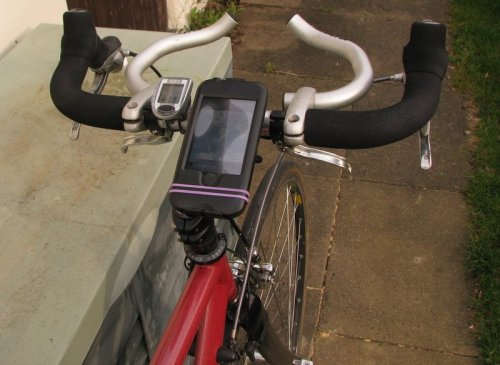 After a brisk jeans/t-shirt blip around the village: 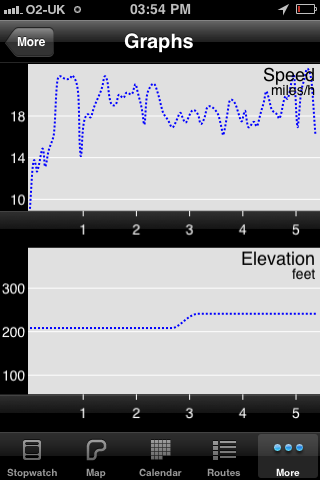 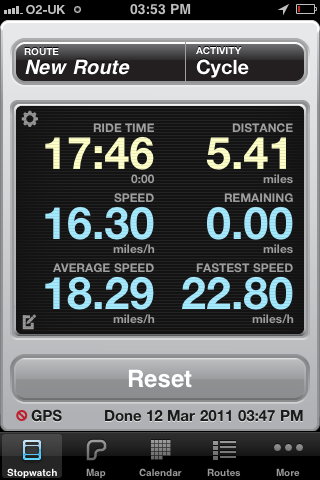 The tracking file – as good as the Blackberry I used before:
http://www.everytrai…?trip_id=996629

Overall I’m pretty impressed. I rode over some rough roads, potholes and humps and the mount appears solid and stable.
The Google map mashup was pretty good and the resolution just right. When I do use this for ‘adventures’ or following other people’s routes I’m going to have to find ways around the battery life, otherwise its looking good.

There are plently of routes out there~: I’ve already got the Blenheim 100 and the Watlington 60 Sportives loaded up for some spring weekends.

Primarily I’m looking for Nav. aid as I’m fed up with printing and squinting, plus gps tracking of rides.

Up until last week I was saving pennies for a Bryton Rider, the new ‘cut price’ GPS map/nav/computer device.

Then I found my old iPhone 3G.

Before you start to detect smugness, this is a ‘venerable’ 8gig 3G iphone, I got it for work but ‘lost’ it last May. Found it while spring cleaning one of those piles of general clutter that seem to just grow naturally in the corners of our house. Spent a joyful day reinstalling everything and of course at one point typed ‘bike’ in the app store.

Blimey, things have moved on. There’s a plethora of GPS enabled apps for iPhone now, which has got me thinking. All I need is a decent mount for the bike and Bob’s my Uncle for those new routes I want to try out. So, one is on order to test this out. I won’t get Cadence or HRM, but TBH I’m not quite so obsessive just yet – I leave those for the Turbo sessions.

Here’s a summary of what I’ve found so far. Please comment if there’s another one you know of that will do more of all this!

+ imports GPX (no limit) I have the Blenheim Sportive in there already since I want to enter the Brompton World Championships on the day.
+ uses Google Maps.
+ nice overlay of existing routes plus comparative stats.
+ good ‘bike computer’ functions (but I already have one).
+ solid tracking function and export (almost too much!).
+ events calendar

Competition focussed: Has a set of ‘Official’ settings, presumably for Audax etc? Also you can set up ‘other Competitors’ – presumably who use the same system. An MTB friend uses this. Looks very good as a 2d map and for following and tracking a ride. Can do live updates to FB etc.

Not just for cycling.

+ imports GPX.
+ can overlay GPX on the 2D map to follow route.
+ solid tracking and measuring.
+ for me – has Everytrail integration – that’s where I put my rides.
+ easy to pause and use the camera from within the app.

One interesting feature is its list/map of Bike shops – for tourers this could be very useful. Also has an Events Calendar but it crapped out on me.

This one is a ‘Tom Tom’ alike, plus I could use before I get the mount as it fits in a pocket and works with an earpiece. By far the best ‘navigation’ tool here but not a ‘tracker’. Bike Hut looks useful enough to use in the car. Don’t tell them though, especially since its therefore essentially a free Sat Nav – not quite their agenda…

Trails works in the background, so you could use Bike Hut for turn by turn while using Trails to track your ride….

Will try some more apps for next time. May actually use one on the bike eventually!

I now use cyclemeter exclusively – its fantastic and continually improved. Worth the tiny price.

Bike Hut is fine out of Town but gets very confused in dense areas.