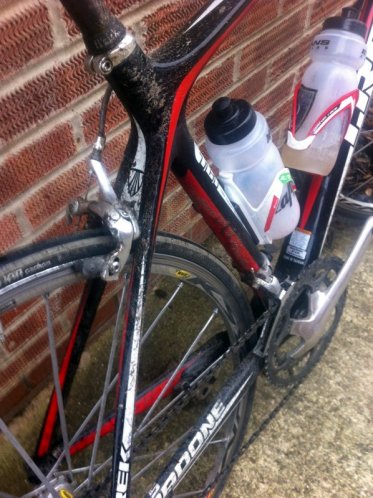 Cold feet again today. When I remember to wear thermal socks and overshoes I’m fine, but just grabbed everyday socks this morning and regretted it. Only 6 turned up for the Sunday club run. Not sure why as the forecast was OK, but there was a lot of flooding on the roads. After climbing Watlington hill a couple of us decided to take it a bit easy – so the group split amicably. We had a good run, pushed ourselves somewhat but the other 4 are all amateur racers (one of whom won a Cat 3 the previous day) and we didn’t want to hold them back.

And when I got home and checked the bike, the Chiltern Hills had left a little of themselves with me: 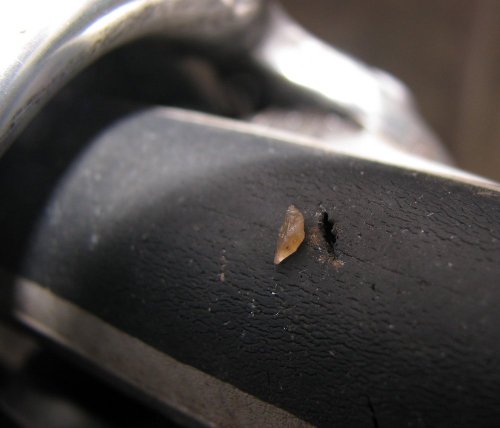 So, check them tyres!

My bike is now complete. I finally managed to ebay some Ultegra STIs and a derailleur so those went on along with a new KMC gold chain a week or so ago. 10 gears now (was 8 speed RX100), 12-27 and a whopping 160 grams lost (!). Of course I’m now thinking on the next bike, when and how I could possibly afford it. Cervelo S3 is the current favourite. But, I am going to have to earn it. If I can make 72Kg and stay with the Club fast group by summer, I will be looking for this frame! Some (rather consumerist I’d agree) goals at last…

Having got back in to regular training (though a bit of a blip this week, so today was hard) I  find that my legs, as previously posted, hurt. Most of the time. This is Good, as Pain is Gain. However, things can be done about it, so I have invested in a ‘foam roller’. These mimic the effect of a leg massage to help loosen the muscles and reduce tight spots. They also help with core training. So we’ll see how and if this works soon. Also thinking of a proper bike fit. A lot of people recommend these, and I still have trouble getting comfortable sometimes, so I might just try it.

Next up though, sorting out riding goals for next year. The overall goal is above – get the weight down, get fast enough to deserve a classy frame. But to get there I need objectives. Given that I don’t have the time/dedication for race training, sportives are the goal. So time to set up next year’s plan. As with 2011 and 2012, this will start with the Cheiveley Sportive in Jan. May be see you there, dear reader?

So far I’ve been for a walk every Sunday morning this year (2008). Sometimes on my own, sometimes taking one or more of my kids.

Last weekend I took my son around Burleigh wood and Begbroke and we saw deer, a hare and birds of prey. Also found house I’d love to live in – Village End in Begbroke. Gorgeous.

This Sunday I was up a little early – to find the kids busy with Mother’s day present making, so I slipped out and just decided to walk ‘eastish’ on my own. This meant about 20 minutes walking on roads, but once past the Park and Ride you’re in countryside. I walked down to Water Eaton, now almost a deserted village, but still with its Hall and a couple of farms. Walking past the Hall and looking back westwards the one could almost be in the 17th century – house, dovecote, chapel and walls all clean and bright in the March morning. Google map of the area.

The footpath continued over a bridge on the Cherwell, into farmland. Thirty or so swans were roosting in the field behind the hall and as I watched, nine more flew in to land from the direction of Cuttesloe. The path seems to disappear at the end of this field, by a large drainage ditch or natural stream (it was difficult to tell, but the water was not stagnant) – certainly it felt like the kind of place I might meet Little Grey Men, or at least spot a kingfisher. Eventually I found a footbridge over the stream/ditch – half obscured by a fallen tree, and followed my nose westwards. Walking up a rise I turned to survey a large swathe of Noth Oxfordshire, mist-free and bathed in the morning sun. Eventually there was no further path to the hilltop (I call it a hill, but in my Yorkshire homeland terms it was a low rise – this is Oxfordshire after all!). I’m glad I didn’t break out of the path, as Googlemap reveals an open-caste mine at the top. That would have burst my bucolic rural bubble.

The footpath became a rutted track and snaked south around a large 30’s house in its own grounds, wonderful verandas and horses in the meadow. The farm track turned back eastwards and suddenly in front of me was a Church spire. I had no idea where I’d turned up. I then passed a huge building on the left behind a large but dilapidated wall – it had a somewhat forbidding aspect and I wondered what it could be – some form of prison? Once past it a sign proved it to be Woodeaton School… I don’t envy the students. Googlemap the area.

The path ended shortly in Woodeaton, a tiny hamlet west of Islip. There is a small old church (13Century, mostly) – the Holy Rood – so I chanced that the door would be open. On entering I was confronted with a large medieaval painting of a saint. It appears that not all such decoration was completely whitewashed away and it was interesting to glimpse the sort of decoration most churches in England once had.

I have a strange attitude towards churches. Though I consider my self an atheist, I am drawn to them. The sheer weight of time, architecture, and sense of strength? In Woodeaton it appears that the church remains very much a centre of what community remains in such places, as a weighty local newsletter proved. These village churches are still impressive today – imagine how they were perceived in 1200! The Normans did something right.

Historically the ‘church’ religion does appear to have worked as a physical centre, substantiating the moral framework governing the lives of people. Apart from priest – induced fear, what kept people tied to them? They project a civilising influence of safety, certainty and peace in an era when FUD could make lives nasty, brutish and short, even if the Church’s attitude could be uncivilised. The universe does not scare so many educated people these days and religions lose influence. However, I can see some of why modern villages find them so important.

I turned back the way I’d come – it was such an interesting walk that I was not going to lose anything by repetition. Walking back down the farm track I spotted a couple of tiny black and white birds I could not place. As small as wrens, but more like tits. I will have to look them up. Rounded the corner and headed downhill, into a stiff westerly, but this only acted as natural aircon for me – by now I was warm and up to my usual walking speed. Coming down that hill I had a moment of ‘oneness’, I guess. Looking out over the Cherwell valley I realised I was happy, mind blank, drinking in the essence of it all – the wind, fresh air, skylarks twittering. This has become more than a habit, its become important to get out on these walks. Its grounding me. I think I’ll be back.